Rumors have been constant the last few few weeks on LG’s next-gen smartwatches that would be the first to come with Android Wear 2.0 operating system. The LG Watch Style and LG Watch Sport are expected to launch ahead of the upcoming Mobile World Congress. The LG Watch Sport now has been spotted on Geekbench, divulging some of the specs. 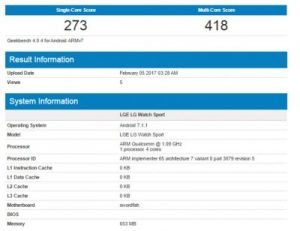 The LG Watch Sport is reportedly the bigger wearable that will come with a 1.38-inch 480×480 pixels resolution display. On Geekbench, the listing reveals an unknown quad-core processor clocked at 1.4GHz. It will feature a 786MB of RAM and 4GB internal storage.

Codenamed “Swordfish”, the smartwatch will run Android 7.1.1 Nougat and will support LTE, Wi-Fi 802.11 b/g/n, Bluetooth 4.2, NFC and GPS. It will come with an IP68 rating and will feature a heart rate sensor.

LG Watch Sport will be decked with a 430 mAh battery. According to reports, LG will introduce both its new smartwatches on February 9 along with Google. It will also be showcased at the Mobile World Congress (MWC) 2017. 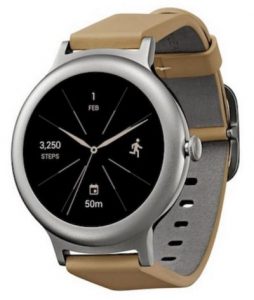 Images of both the smartwatches had leaked multiple times, giving a glimpse of the design. From the visuals, the LG Watch Sport appears to offer a rubber strap and a metallic body. It is expected to be priced at $349 in the US.

For a quick runthrough of the other smartwatch that LG is launching, the LG Watch Style, it will carry a lesser resistance to water and dust with IP67 rating and will feature a smaller 1.2-inch 360×360 display. There will be a 512MB of RAM, 240 mAh battery and digital crown for navigating.

Both the smartwatches will boast a stainless steel build and circular OLED displays. The LG Watch Style could be priced at $249.