After smart cars, smart speakers and smart homes, the next thing to become smart is the scooter. And that is more and more evident with Kymco’s new Smart Scooter – the Noodoe.

The Taiwanese company behind Noodoe aimed at making a scooter that was both smart and safe. They called it, the Noodoe experience. Perhaps the smartest feature about the scooter is the instrument cluster dashboard. Instead of the regular speedometer, we get a round digital display, reminiscent of the Moto 360. It also functions like the 360’s, with optional customizable watch-faces. 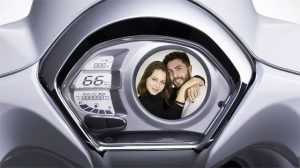 The display also has different widgets to show information like speed of travel, time, distance, the weather and also a compass to keep handy. Of course, the display will also be able to show notifications thanks to being connected through Bluetooth to a phone.

According to the company, the dashboard is meant to provide the rider with all the information they need on their journey. The compass for example, looks like a submarine’s radar, but more like a futuristic radar that glows towards the edge, at the direction that the rider is going. If the user’s friends are also connected through the proprietary NooDoe system, they can find out where they are hanging out and probably make an inappropriate entrance.

The notifications will be shown to the user not while they’re riding though, because that would distract them. So instead, it only shows the notifications when the scooter comes to a complete halt. They’ll disappear again, once the scooter starts moving. This is a setting which cannot be changed by the user, and it’s for the rider’s safety of course.

The companion app which comes along with the scooter will allow users to customize their dashboards and change the speed dial image to even their own photo should they wish. Users can make their own themes and upload it to the community while they can download others’ themes as well.

But that’s about it. The smart compass is the most functional, allowing users to find gas stations and other important places of interest nearby. According to their official webpage,Noodoe can also record where it was last parked and guide the user to its location through the mobile app. It’s pretty nifty, and God knows bike parking these days can be pretty confusing, especially entering malls.

As for other ‘smart’ features that could be appreciated such as fuel capacity alerts, distance until fuel lasts and also details about the status of the scooter’s health haven’t been mentioned as being part of the alerts that dashboard could offer.