At CES 2017 we had a glance at BlackBerry’s upcoming Android smartphone. For those who are eagerly waiting for the release, BlackBerry has just made the release date official.

The BlackBerry DTEK70, codenamed ‘Mercury’, will be unveiled on February 25. The Canadian company made the announcement in a Twitter post on Tuesday.

BlackBerry has zeroed in on a date that is around the much-hyped Mobile World Congress that will begin on February 27 in Barcelona. The telecommunications giant was expected to launch its last QWERTY phone, made by TCL, at the recently concluded CES in Las Vegas. However, the dates were shifted to coincide with the MWC.

We don’t have any official specs available as yet, but rumors give a glimpse of what to expect. The BlackBerry DTEK70 will sport a 4.5-inch Full HD touchscreen. It will be powered by a Qualcomm Snapdragon 625 processor and will include 3GB RAM and 32GB storage. In terms of camera, you might see a 18MP primary camera and 8MP snapper for selfies.

The phone, which will be powered by a 3,400 mAh battery, is expected to be priced around DTEK50 which launched at $299.

BlackBerry made its comeback with an affordable smartphone in the form of DTEK50 that was first announced in July 2016. It was the company’s ‘thinnest phone ever’ at 7.4 mm, and featured a 5.2-inch scratch resistant Full HD display, Snapdragon 617 processor, 3GB RAM and 16GB ROM (expandable up to 2TB). 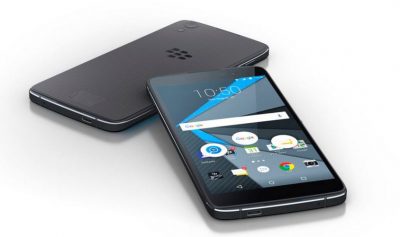 BlackBerry DTEK50 is equipped with a 13MP auto-focus rear camera with PDAF and Fast focus lock as well as 8MP front camera with flash. Alongside the DTEK50, BlackBerry also introduced a bigger variant, the DTEK60.

The soon-to-release Mercury should be one worth your serious consideration. With all the top-tier phones launching at MWC, it is to be seen how well it will be received. The company is keeping pricing and most of the specs under wraps until it has been formally launched.