After a short hiatus, HTC is back in the game with two new smartphones with top of the line features. The Taiwanese company today announced the HTC U Ultra and HTC U Play.

The HTC U Ultra aka Ocean Note and HTC U Play aka Alpine was unveiled at a special event on Thursday. Though the pricing is not made public yet, there is word that consumers can start receiving the handsets by mid-February.

The HTC U Ultra has a 5.7-inch Quad HD Super LCD screen, along with a smaller 2-inch screen on top of it. The HTC U Play is smaller in size featuring a 5.2-inch Full HD Super LCD screen. They feature a 3D contoured glass design which HTC refer to as “liquid surface”.

The ticker display on U Ultra is similar to that seen on X Screen and V20. Called the Priority Screen, it is where users can get important alerts and notifications via Sense Companion.

Both phones feature biometric voice recognition. Users can train them to respond to commands for specific tasks and purposes. Both U phones come with HTC’s new AI assistant – the HTC Sense Companion. The Sense Companion can help you navigate your phone, accept or reject phone calls, snooze or dismiss alarms. The Companion can suggest if you should dress warm, leave for work earlier due to snow or eat at one of you favourite restaurants. 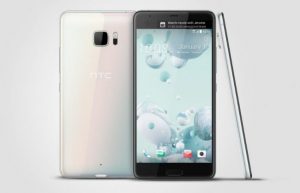 The U Ultra has four microphones with an always-listening feature. Both smartphones are said to ship with HTC’s new USonic earphones which feature microphones in the earbuds to map your ear canals to adapt audio frequencies to each individual’s ear.

For other key highlights, the U Ultra is powered by a 64-bit Qualcomm Snapdragon 821 processor with 4GB RAM and 64GB/129GB storage. For pictures there is a 12MP Ultrapixel 2 rear camera with laser autofocus, optical image stabilization, and phase detection autofocus. On the front, there is a 16MP sensor.

The U Play on the other hand features octa-core MediaTek Helio P10 SoC, 3GB/4GB RAM and 32GB/64GB storage. The device is equipped with a 16MP front camera and 16MP rear camera.

HTC has taken the Apple route by ditching the headphone jack, so you’ll have to get used to USB Type-C headphones.

If you are already enthralled by the features, you can pre-order the devices on the HTC website. As for colors, you have a choice between blue, black, pink and white. But then that might not be standard for all regions.