Audio-Technica, a well-known brand in the world of audio, announced two new pairs of wireless headphones at the just concluded CES 2017. 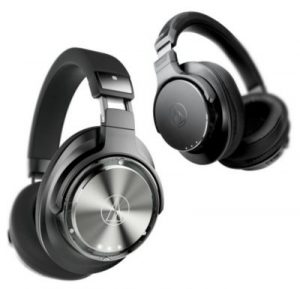 The ATH-DSR9BT and ATH-DSR7BT with Bluetooth wireless technology was launched at CES 2017.

The ATH-DSR9BT and ATH-DSR7BT are the first Bluetooth headphones equipped with new Pure Digital Drive system. The technology keeps the audio signal completely digital “from source to driver” to offer impressive sound quality.

It uses the Trigence Semiconductor Dnote chipset instead of a traditional D/A converter and amplifier. Audio-Technica says it keeps the audio signal entirely in the digital domain from the source right through to the driver, eliminating the opportunities for disruption or distortion.

The headphones support aptX HD, aptX and AAC codecs. Both feature NFC (Near Field Communication) functionality for ready pairing with a compatible device.

Additionally, the headsets come with a built-in mic and controller for answering calls and controlling volume and music playback.

Both ATH-DSR9BT and ATH-DSR7BT are able to deliver Hi-Res Audio compliant playback from audio sources when connected through the USB cable.

And the controls are mounted on one of the earcups for ready access. On both models, three LED indicators provide pairing and charging status, battery level and the codec in use.

To the less significant highlights, both the headphones feature soft form fitting foam earpads and a padded headband for total comfort. They also come with a rechargeable battery that provides 15 hours continuous use.

The ATH-DSR9BT should retail at $549, while the ATH-DSR7BT wireless headphones will have a cheaper $299 price tag. You can expect a launch around the second quarter of 2017.