Not one to break tradition, just like all CES shows before it, this year as well, Sennheiser have rolled out its latest headphones on the floor – the HD 4.5OBTNCa and the HD 4.4OBT. They are wireless and will be part of the company’s popular HD 4 series of headphones. 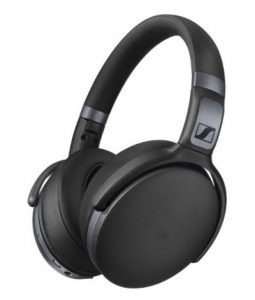 The main difference between the two headphones that were just released is the ‘NC’ in their names, or lack thereof. The 4.5 will have Noise Cancellation tech built-in while the 4.4 doesn’t. They’ll both come with Bluetooth 4.0 as well as AptX for ensuring that users get the highest quality sound possible and NFC so that pairing with devices becomes a little less of a task. Most notably, and impressively, the headphones will retain about 25 hours of battery on a single charge, but only for the non-NC headphones, since Noise-cancellation cuts the battery to just about 18 hours.

Physically, the headphones don’t look like anything too flashy. They’re pretty plain looking but have a certain elegance about them. As far as weight and materials are concerned, nothing yet has been unveiled by the company. Even pricing is still a speculation at this point. Along with the headphones, Sennheiser has also announced a new pair of wireless earphones as well under the HD1 line. These earphones will use Bluetooth 4.1, AAC and AptX. They’ll have a sort of Halo-styled band and will add to their Momentum line-up of earbuds.

These will provide up to 10 hours of battery life on a single charge, as well as a remote on the neckband with three buttons for controlling the music and attending calls. Just like the headphones mentioned above as well, the HD1 line hasn’t been given its price range or any other details apart from the bare minimums. These earbuds however, look very sleek and the stitching done on the neck-band sort of hints that these will probably be priced on the higher segment of earbuds that can be found in the market.