Casio has always been the favourite go-to watch of choice for the adventure-bound. Casio is making a convincing case for still being the best option with its new outdoor watch, the Pro Trek WSD-F20 announced at CES 2017. 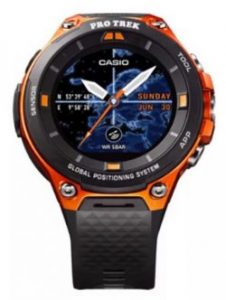 This is a cool watch for sure, for a very uncool name, but once we get down to the spec sheet, we’ll forget about it. The F20 is the successor to the much acclaimed F10 released last year. This time around, the big improvements include the fact that the watch runs Android Wear 2.0 and interestingly it’s also got in-built GPS. Fortunately for those who still have the F10 and are probably going to be bitter about the upgrade, they’ll be pleased to know that their watches will also get the update to Android Wear 2.0 as well.

Now, the F20 isn’t any different than last year’s model aesthetically. But with the GPS, the watch can now handle the tracking of a ton of new activities as well as provide users with downloadable maps or offline colour maps – something that an outdoor wearable should really have in the first place. More smartwatches need to have this feature. The GPS is a low-power consumer so battery life shouldn’t be a problem.

Even when offline, the GPS can track the user’s location, thanks to a new Location Memory Application built into the device. Users can use the map in their watch to add their own customizations like markers even without needing any data connection. Other new improvements and features include anti-fouling coating on the screen so that there are no fingerprint smudges on the touch screen. The watch is also a lot more rugged this time around so it’ll be able to withstand a bit of a beating in the wilderness. The extensive utility and features makes this smartwatch a gem among the rest of the offerings out there right now.

Even as a regular smartwatch purchase, it’s worth considering buying. The watch will be available from April 21 and although pricing hasn’t been revealed yet, a report by TalkAndroid.com claims that it’ll probably cost around the same as when the F10 (around $500) costed at launch. Real world usage and other statistics like battery life should also surface as the launch date comes nearer.