The standard for headsets has increased over the years considerably. There are headphones for so many specific applications nowadays, including gaming. That’s why Logitech decided to make what’s arguably the best gaming headsets out there today – the G533, announced at this year’s CES. 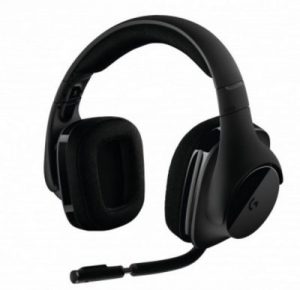 Most notably, this is a wireless gaming headset, giving users the freedom to move about without worrying about the tangled mess that their wires would otherwise cause. These headsets feature Pro-G drivers and DTS Headphone: X 7.1 Surround Sound. The drivers are made out of a combination of hybrid mesh materials which deliver unparalleled performance that are otherwise featured in audiophile headphones.

Because of the surround sound, players will be able to hear positional sounds, like someone who’s sneaking up behind them or even the rustling of wind. But it’ll only be possible so long as the game they’re playing supports it. Players will also get to change the volumes of each of the points of channels so that they can focus on specific points for striking. It’ll be especially useful during first-person shooters.

Even for the lounge gamers, the headphones will be capable of having a range of 15 metres. There’s even very little lag, about three to six milliseconds apart. It weighs 350 grams and being the size that it is, with the tech packed inside, it’s bound to draw some heat. But according to TrustedReviews.com, Logitech has put in a lot of work to draw the heat away from the players’ heads. It’s also got a foldable mic with a pop filter.

Of course, it’s got some buttons on the side for adjusting the volume, switching on/off the device and other functions for easy reach.

Even the battery performance is stellar, specifically made for those long gaming sessions, it should last about 17 hours on a full charge, with a charging time of about 3-4 hours.

The Logitech G533 will first be available in January and for a price of about $150.