The ongoing CES 2017 event is turning out to be an exciting one for gadget lovers. New smartphones and computers with overwhelming specs are being announced. The latest to have upped the stakes considerably is Acer with its monstrous Predator 21 X laptop. 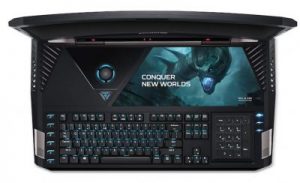 With black and silver edges and showing a robust look, the Predator 21 X is targeted at gamers looking for great performance and flexibility in a laptop computer.

Thunderbolt 3 brings Thunderbolt to USB-C at speeds up to 40 Gbps. The notebook also features a cooling architecture consisting of 5 system fans and 9 heat pipes.

As if that was not enough to take home the point, it further includes Acer DustDefender, which removes dust build-up and improves heat dissipation, and Acer’s CoolBoost app to adjust the fans’ airflow. The mechanical keyboard features Cherry MX Brown switches, with individually programmable backlit keys.

Towards the sound, the Predator 21 X features a 3-way audio design which is powered by 4 speakers and 2 subwoofers. A more important highlight is the support for Tobii’s eye-tracking technology. It allows gamers identify enemies, aim and take cover simply by gazing at objects on the screen in over 45 titles.

Meanwhile, Acer is also updating its Predator 17 X with an Intel Core i7 processor and an Nvidia GeForce GTX 1080. It should be available starting this month for $2,599.