Though the devices were expected to be launched at a special event in Malaysia on January 5, Samsung decided to bring it a little early.

“At Samsung, we are always trying to ensure our customers have the most advanced products on the market,” said said DJ Koh, President of Mobile Communications Business, Samsung Electronics.

“The latest Galaxy A series is a testament to this. We integrated our unique approach to design as well as the features Galaxy customers have come to love to provide added performance without compromising on style.”

The premium metal frame and 3D glass phones for the first time are IP68 water and dust resistant and is made suitable for any activity or situation.

Other highlights include a larger memory with expandable storage support up to 256 GB, longer battery life, reversible USB Type-C port for easy connectivity and the ‘Always on Display’ to quickly view time and calendar without waking up the device.

The device supports Wi-Fi 802.11 a/b/g/n/ac, Bluetooth v4.2, and NFC and microSD card. All the features are backed by a 3,600mAh Fast Charging battery with USB Type-C port.

Coming next is the Galaxy A5 that sports a 5.2-inch full-HD Super AMOLED display, 2GB of RAM, and a 3,000mAh battery with fast charging. It also has similar camera sensors as found in Galaxy A7. 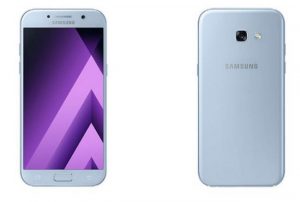 The Galaxy A5 comes with a smaller screen size of 5.2-inch

The smallest of all the three is the Galaxy A3 which has a 4.7-inch HD display, a 1.6GHz quad-core processor and 2GB of RAM. The phone is equipped with a 2,350mAh battery.

All three run Android 6.0.1 Marshmallow out of the box. They also are equipped with sensors like Accelerometer, Proximity, Geomagnetic, RGB Light, Hall, Fingerprint Scanner and Barometer.

The Samsung Galaxy A (2017) series will be first available in Russia in early January and should soon enter other key markets. The Galaxy A series will available in four colors – Black Sky, Gold Sand, Blue Mist and Peach Cloud.