LG is going to be kicking off CES with a bang come 2017, quite literally actually. The company had announced that it would be unveiling its new surround sound wearable device, a first in its class, and perhaps one of the most innovative pieces of wearable tech we’ve seen when it comes to sound. The second is a pair of very special wireless buds that’s actually found inside the first product. 2017 is going to be a very interesting year indeed.

Both the products will be labelled under the TONE name and the first, a wearable called the TONE Studio features four speakers – two full range ones at the top and two vibrating ones at the bottom, providing the wearer with a personal full surround sound experience when they’re watching a movie, listening to music or even playing games. It’ll feature Hi Fi DAC (Digital to Analog Converter) which enhances the audio by recreating the content as accurately as possible. It also comes with Dual Play, which allows for pairing two of these speakers together to share sound from a movie, or even a playlist so no one misses out on the goodness.

The most interesting thing about this device is how it’s going to be worn – around the neck. It’s got a sort of boomerang design that’s meant to hang from the user’s neck and the magic begins there. It’s pretty ingenious, considering it doesn’t come with any hassles for wearing over the ears and it seems like a pretty stable position to keep.

The second in the line-up being unveiled by LG is the TONE Free – a pair of wireless earphones that are attached to the neck band of the TONE Studio. When not in use, the ear buds can be stored back inside the neckband where they are then wirelessly charged. The neckband will also be able to provide vibrations and notification alerts for missed calls and messages when paired with the user’s phone. And if the neckband itself runs out of charge, there’s also a charging cradle that packs enough juice. 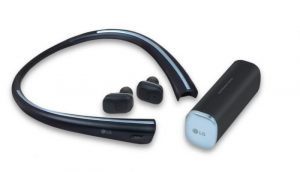 Now this two-in-one product by LG is just the headliner for the rest of the line-up that will be unveiled at LG’s Bluetooth headset showcase at CES. Apart from this, the company will also unveil the TONE Infinim and the TONE Ultra. The former will feature LG’s Metal Layer Speaker Technology that will provide more crisper and cleaner sounds than we’re used to seeing on our regular plastic encased headphones. Not to forget the mesmerising levitating speaker which LG unveiled a short while back, which is bound to turn a few heads.

LG is upping its game big time, with the early release of G6 flagship smartphone and a host of promising audio solutions. Life’s good for LG this upcoming year.