Apple swept us off our feet with the Lightning connector thanks to a simple feature. You could connect it both sides and this is something that annoys Android users on a daily basis.

You never know if you oriented micro USB cable the right way up different phones and different tablets might have them upside down. The downside of Lightning is that it works at speeds similar to USB 2.0 (max 480 mbps) while the USB 3.1 specification offers a whopping 10Gbps.

This means that you will be able to use the same cable to power your computer, display, smartphone or tablet and at the same time you will be able to transfer 4K resolution and beyond. Interconnecting all devices will get simpler and 100W offers a lot of potential to power and charge multiple devices. 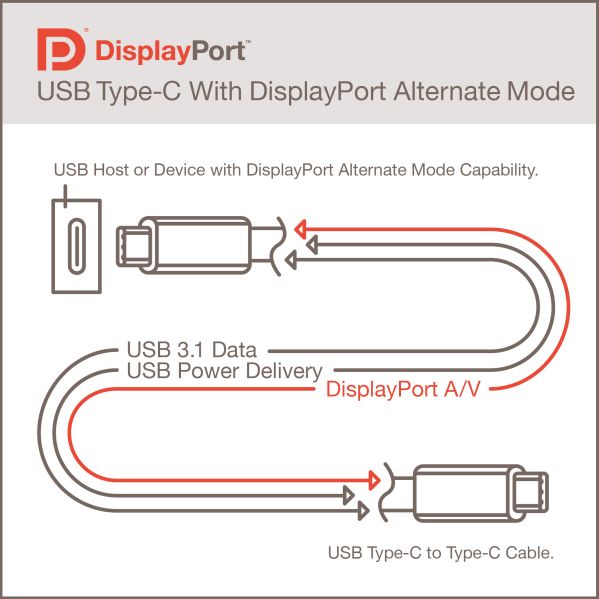 Like USB, DisplayPort uses a packetized data structure and differential AC-Coupled signal “lanes” that carry high speed data with an embedded clock. This allows the same electrical circuits and cables to carry either SuperSpeed USB data at up to 10Gbps per lane, or DisplayPort at up to 8.1 Gbps per lane, as defined in the new DisplayPort 1.3 Standard.

Early implementations of DisplayPort Alt Mode USB Type-C devices will likely use existing DisplayPort 1.2a capabilities that support up to 5.4Gbps per lane. Using 5.4Gbps across all four high-speed lanes will support up to 4K (4096 x 2160) display resolutions at a 60Hz frame rate with up to 30-bit color.

The new VESA Alternate mode DisplayPort the added flexibility of 100W power and 10Gbit speeds of USB 3.1 will put a lot of pressure on the Thunderbolt standard. New VESA Alt mode will enable USB 3.1 ports on monitors as well as docking station that can charge devices up to 100W and offering quite fast USB 3.1, 3.0 or even 2.0 connectivity. There is enough bandwidth to support even 5K (5120 x 2880) resolution and beyond.