Huawei has launched a new smartphone that has all the makings of a premium device. The Honor Magic is crafted in a metal frame and has curved edges with a double 3D glass at the front and back. 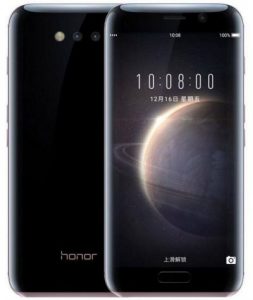 The Honor Magic was launched as part of the company’s third anniversary celebration. It has some unique sophisticated features, for instance the FaceCode intelligent recognition for locking and unlocking phone, and the intelligent sensor that turns off the phone automatically when placed down.

There is also a Google Now-like tool that shows relevant and timely information. The virtual assistant is named Smart Services. It brings predictive and contextual information to users, be it movies or shopping.

Weighing 145 gms, Honor Magic runs on Android Marshmallow and sports a 5.09-inch (1440×2560 pixels) Quad HD Amoled 3D curved display. Under the hood, it is powered by a Kirin 950 processor with 4GB of RAM and 64GB internal storage.

The camera is pretty basic with just 12MP in the back with dual-tone LED flash and f/2.2 aperture. The best part? It has a dual camera set-up. For selfies, the device has an 8MP shooter. The smartphone draws its juice from a 2,900 mAh battery that supports fast charging.

“The Honor Magic encapsulates our commitment to cutting-edge innovation and technology,” George Zhao, president of Honor, said in a statement.

The new Honor Magic smartphone is priced at CNY 3,699 ($531). It is currently available for consumers in China via Vmall, Tmall and JD.com. There is no announcement on the global availability as yet.