There’s no end to which accessory or apparel on the body can now be made ‘smart’. Continuing the trend of smart, weight-watching and tracking devices as wearables is Siren Care’s smart sock.

Siren Care have figured out that the best way to check for diabetes and to monitor the body is to do it through a sock. But this isn’t an ordinary sock with a chip attached to it. There are a ton of temperature sensors embedded within the socks which detect inflammation in realtime for diabetics. But what does the foot have to do with diabetics? Well, type 1 and type 2 diabetes patients are known to have swelling issues in their foot and could lead to infection, amputation and spreading to other body parts. This enables early detection and helps cut off the complications at the beginning. 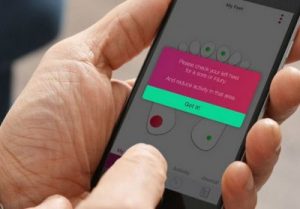 The alert through an app will show you which foot has a potential risk.

Another company also thought it was a good idea to track diabetics through a person’s foot. So, they made a shoe that can do the tracking. But SurroSense Rx didn’t count on Siren Care to take it one step further – by putting that tech into a sock and not the shoe, because the sock is closer to the skin. Once the sensors do all the tracking, and all that information is provided in an app to the user’s phone. If the app detects that there’s any problem, it’ll alert and notify the user to check their foot.

An interesting feature to note about these socks is that they won’t need any charging. The in-built battery can last up to six months and only turns on when it’s being worn by a user. They are also washable by machine and are durable enough to last the six months that it’s in use. This is technological textile right here.

But this is only the beginning, since the founders of Siren Care have a lot more planned for the future. Currently, the Siren textile technology can incorporate moisture sensors, pressure sensors, light sensors, LEDs, RFIDs, MCU, BLE and other such sensors into their fabric. So there will be other apparel for users who can track other forms of physical or internal anomalies.

Siren Care’s socks can be made available for pre-order and there’s a subscription plan to receive seven pairs of socks every six months. It isn’t anything short of what Iron Man probably gets with his Iron Man suits, but just that we don’t need it assembled atop us; we just need to wear it. This could probably be the potential future for wearables!