Google Play’s library of movies will start supporting 4K Ultra HD resolution from today. For now, it is officially available in the U.S. and Canada. 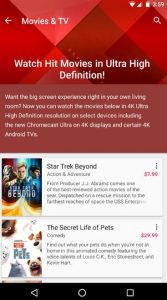 In a blog post on Tuesday, the search giant announced that Google Play Movies offers more than 125 movies in 4K resolution using VP9.

Google Play Movies & TV is a video on demand service available in over 100 countries around the world. The pay-per-use service allows users to rent or purchase movie/TV titles. And now with 4K streaming and VR viewing, the platform will only become more attractive.

This October, Google also launched the Daydream VR platform. So all movies and TV shows in Google Play library can be viewed in a virtual cinema like setting.

You can take a virtual tour of the selection of new release movies, next day TV shows, and more than 10,000 catalog titles or buy on your phone to watch later using your Daydream VR headset.

Google also announced on Tuesday that it has made Google Play Movies & TV app available on Samsung’s latest Smart TVs.