It’s a good time to be Star Wars fan. With the latest addition to the franchise coming up, SoftBank, a lesser known mobile phone manufacturer from Japan has come up with two new models to celebrate. 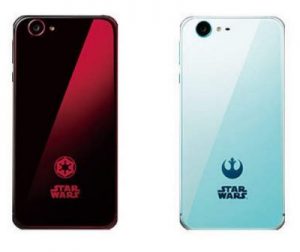 The folks over at Japan can now join the dark side or the Jedi wing, should they choose. Although the phones haven’t yet been given a name, they pack some really commendable features. It’s very unlikely that other manufacturers will go this route and pack some decent hardware into phones like these which tribute movies. The phones will be coming in two variants – a dark side variant, which will be a dark blood-red colour and a light side – a white coloured model.

The internals will consist of a Snapdragon 820, 3GB of RAM, 32GB of internal storage space as well as microSD card expansion, a 3,000mAh battery and a 1080p 5.3-inch IGZO screen. They’ve also got a mean 22.6MP camera on the rear and because it’s from a place like Japan, it’ll also come packed with its own TV tuner, because people around South Asia get nice things like that.

Because these are special edition Star Wars handsets, they’ll come bundled with exclusive Star Wars goodies. Atop Marshmallow, will be a custom skin, based on the light or dark variant which the users will choose. They also come with a neat looking live-wallpaper of either a TIE Fighter or X-Wing. Both handsets will come pre-loaded with the Star Wars: Force Collection digital card game, exclusive Star Wars emoji as well as ringtones, along with a specially themed alarm clock app.

But wait, there’s more. The phones will come with a movie player app that will provide the users with a free copy of the Star Wars: The Force Awakens movie, which can be viewed any number of times until 2020, and they also get five metal figurines of Rogue One as well.

These two phones come courtesy of a partnership between Sharp and SoftBank and for now is only available in Japan starting December 2. There’s probably a zero chance that these phones will make it anywhere outside of Japan.

But these specs are quite promising for a phone and although the competition might pack certain advantages over these ones, we’re pretty sure the extra goodies that come bundled with these phones is more than worth it.