The Nook was a good refresh from the regular Kindles and tablets that people were used to four years ago. Now Barnes & Noble have done an update on the tablet. It is available for pre-order right now at just $50. 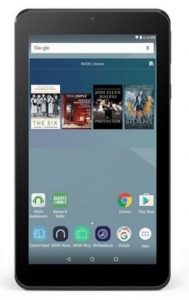 Of course, at that price point, we’re sure that they’re aiming the competition directly at Amazon’s Fire tablet with their new Nook 7. At $50 however, users will get a colour display and Android OS, compared to other companies which would otherwise offer just the normal E Ink display.

Better yet, it’ll come with Google Play Store and Chrome, Google Maps and Google Search built-in. That means it can be used as a regular tablet too. Of course, Barnes & Noble have their own influence on the device, providing their own apps for eBooks, periodicals and audio books.

On the spec sheet, the new Nook 7 offers 7 inches of 1024×600 pixels of display, seven hours of battery life and 8GB of in-built storage, plus a memory card slot for expanding storage up to 128GB. It supports the standard dual-band of WiFi, has a 5MP rear camera and a 2MP front camera. It’s got a USB 2.0 port and a 3.5mm jack. All the processing is done through the MediaTek MT8163 quad-core ARM Cortex-A53 processor with graphics, courtesy of the Mali-M720 MP2 graphics and a 3,000 mAh battery. It’s got an okay mono-speaker output for sound and Bluetooth 4.0 too. That’s a lot of value for $50.

Thanks to its association with Samsung, Barnes & Noble have been able to sell its tablets with the same functions of the Samsung tabs but with the Nook apps to make it just as good as a regular E-Reader and much more. While this is a very sub-par tablet in terms of performance, it’s got the most of what we should expect for a tablet at that price-range. We’re not hoping for anything special like on-time updates or anything, so we’ll just have to settle for Marshmallow for the rest of the tablet’s lifetime.

For those interested, the Nook will be available for pre-order now and will be ready for shipping by the 25 of November. It’s not necessarily an E-Book reader, but it’s a cheap tablet for those who want one on the go.