Vivo V5 is not just any smartphone. It is the world’s first to feature a 20-megapixel selfie camera.

Part of the V series, the new V5 was launched at an event in Mumbai. The device sports a 5.5-inch HD display with Corning Gorilla Glass protection. Under the hood, you have a MediaTek 6750 processor paired with 4GB of RAM and 32GB flash storage.

While on most phones you have a bigger rear camera and smaller selfie shooter, on V5, you have a 13MP camera on the back with Phase Detection Auto-Focus (PDAF) and LED flash, and a 20-megapixel front shooter with Moonlight Glow LED flash, Sony IMX 376 image sensor and 5P lens. 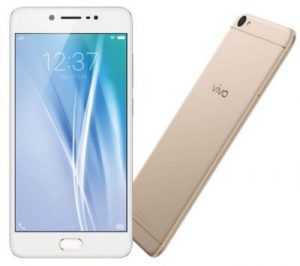 Available in Crown Gold and Space Grey versions, V5 has a fingerprint scanner that can also be used to open select apps. The full-metal body device is equipped with the Hi-Fi audio chip to offer better audio quality and Smart Split 2.0 that offers split-screen multitasking.

Eager to get your hands on one? Pre-orders start on November 16. The device should begin shipping by end of the month. During the launch, Vivo also teased the V5 Plus with dual front cameras. The device will be launched by end of the year.

Vivo no doubt beats the competition with its selfie-centric device. The Oppo F1s which also is priced close boasts of a 16MP shooter in the front. The Lenovo Z2 Plus priced at Rs 17,999 has 13MP rear camera and 8MP front camera for selfies. The Z2 Plus was powered by a quad-core Qualcomm Snapdragon 820 processor and 3GB RAM, while F1s featured a Mediatek MT6750 Octa core processor with 3GB RAM.

In two days Vivo will be releasing two more devices – the X9 and X9 Plus. Going by the rumors, the X9 and X9 Plus will feature dual front-facing cameras. The X9 could be powered by an octa-core Snapdragon 653 processor with 4GB RAM and 64GB storage. The devices will be launched at an event in Beijing, China.