Vivo is soon to release the V5 and V5 Plus. The high-end devices will be officially launched at an event in Mumbai, India on November 15. 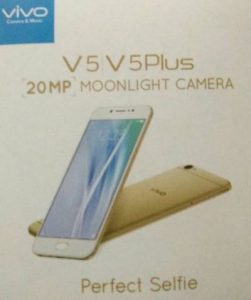 The leaked packaging of the upcoming Vivo phones (Source: PhoneArena)

While some features have already been making rounds, a leaked packaging confirms few details on the camera and internals. The images suggest that the handsets will feature a massive 20MP front-facing camera.

On the specs, you have a 5.5-inch HD screen with an all-metal body and a fingerprint sensor integrated within the home button. It will be powered by Qualcomm’s Snapdragon 652 octa-core SoC (four Cortex A53 cores + four Cortex A72 cores) paired with 4GB RAM and 32GB of internal storage (expandable up to 128GB).

Besides the 20MP selfie shooter you have a 13MP rear camera with LED flash. Connectivity options include Bluetooth, Wi-Fi 802.11ac and 4G LTE with VoLTE voice calling support. The smartphone runs Android 6.0 Marshmallow with Vivo’s FunTouch OS running on top.

The V5 could carry a price tag of Rs 20,000 ($296). We dont know much on the Vivo V5 Plus. But you can expect the device to have a bigger display and battery. The last devices Vivo launched in India were the V3 and V3 Max.