Photo editing has come a long way, thanks to software developers like Adobe. Lightroom has been the premier photo-editing app for professionals. Now, the Loupedeck will make editing photos on Lightroom a lot like using music software in a studio.

What the Loupedeck aims to achieve is to bring a physical control panel to the users’ hands with the knobs, levers and dials to control the effects and visuals that they see appear in Lightroom. It’s designed to look a lot like a music console, and even functions like one. 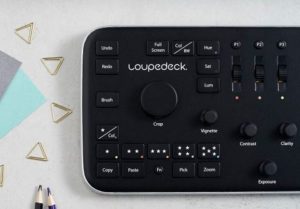 Loupedeck is a plug and play photo editing console for Lightroom

“The hands-on and highly intuitive console replaces the mouse and keyboard, and it works seamlessly with Apple and PC operating systems,” the company says. “Simply plug and play.”

All the controls are neatly labelled so users know exactly what they’re controlling on the screen. There is also a dial that allows the controls to reset the values of all the settings. The buttons, sliders and knobs are set upon a 2.2lb panel that’s 6.1 inches deep and 1.26 tall. It’s also about 15. Inches wide. It looks almost as big as a keyboard.

In fact, the deck can be used in place of the mouse and the keyboard entirely during the photo-editing session so there won’t be any back and forth between the input modes. Of course, it’ll be better to dial through skipping back a history of changes than using the mouse and clicking the undo button again and again. The deck promises no interruptions when using Lightroom and offers complete and total control of every aspect and function.

There’s also a separate row of wheels that can be customized as per the user’s tastes to alter any setting of their choice. And in case a group of photos require the same settings done to them, a button press makes it possible to shift the edits onto those photos as well – a real time saver.

Currently, Loupedeck seems to be the only serious and customizeable contender in the market for those looking for professional photo-editing consoles. Then there is also Palette and Brushknob which offer the same interface as the Loupedeck.

It’s currently going through rounds of funding on Indiegogo and will be reaching its target funding amount pretty soon at the rate that we’re seeing it go. And if all goes well, it will be available to the masses in 2017 with a retail price of $410. It’s probably not the cheapest solution for doing something that is already being done on a screen, but it is the convenience and utility it offers that matters in the end.

We’re pretty sure that this should be on every photographer’s Christmas wish-list for 2017. They might even release the turn-table version to accompany the console.