It’s 2016 and people still haven’t found a way to measure real objects without using a ruler or a pen. That’s all about to change soon, thanks to the founder of Misfit and his brand-new venture – the Instrumments Zero 1. 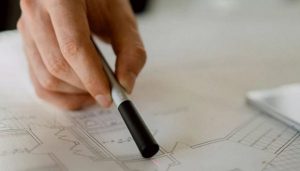 Essentially, it’s a pen, a stylus and a pencil – but not all at once. It just comes in those three variants. And as a pen, it writes pretty well too. But the main feature about this pen isn’t that it can write. But that it can measure any surface, on any measurement. Each of the variants keep their weapon on the top. A ring that projects a laser that, when guided upon a surface and dragged, can measure how far it’s being dragged and what it is measuring, through a companion app. The app will let the user know if they are measuring the length, width or height of an object.

Once the measurements are recorded, the user can simply snap a picture of the object on their phone that will make a web card out of the image, thanks to the app and it will accompany the measurements that were just recorded. The measurements taken from the pen are as accurate to within .1 mm. So we’re sure it’s pretty damn accurate. It can also measure 3D objects, so curves and contours and indents can be easily measured with the device.

Why this invention happened to come to fruition, is that a lot of designers and architects usually have to carry around a large amount of measuring tapes, rulers, geometry cases, books and other such materials to scale, record or exactly measure surfaces and objects for their projects. Now if we imagine all of these capabilities inside something as simple as a pen, life would suddenly become quite easier, or lighter depending on how many instruments the user would generally have to carry.

In the future, much like Tesla, the pen will receive updates to enhance and unlock even more features for users to be amazed at. One thing we think should come soon is a calculator for measurement purposes and converters, so architects and designers will be able to accurately calculate an isosceles from an acute and also get an overall surface area of the object. That would make the math a lot easier to consider.

How to acquire it

As of now, it’s possible to buy it through Indiegogo for the starting price of $149. A leather case is also available for $29. For the early birds, this case comes for free. It’ll be even more widely available come December 1, as many retail stores will be carrying them.

For the real designers and architects, this is a wish fulfilled. For everyone else, it’s not the most important thing in the world.