he new Paint 3D for Windows will be coming out early next year for users via the Creators Update that Microsoft plans on pushing to all Windows 10 devices. It seems less like a casual app now and more like a serious creative platform for experienced designers and beginners. Here are 8 new features that will come with the Paint 3D app for Windows when it arrives! 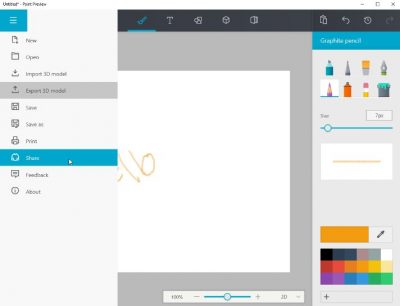 The improved interface is more user friendly than most graphical applications out there today. There aren’t any weird toolbars with icons that we don’t know what to do with, neither are their random graphs and grids that turn on whenever a tool is selected. The Paint app opens up to a nicer, cleaner interface, with big, bold buttons and layouts for simple and understandable instructions. It won’t take anyone more than five minutes to completely get the whole software figured out.

For an application that offers so much on the table, it’s nice to see that they didn’t complicate the way people use it. Being aimed more towards students, this is a good step in the right direction.

The tools within Paint have also received a makeover. For example, there are different types of colour textures that users can choose from. From matte to even polished metal textures. It’s a great way of adding more life to images at the source. Other applications would normally have these presets omitted or not accessible.

Apart from that, there are extra tools on offer like a Calligraphy pen that lets users use the stylus for some neat handwriting. The History tool is a much-appreciated tool to have on-board the app, and allows for free-flowing changes in history of the current contents on the canvas.

Paint now lets users create their own creations in 3D quite easily. There are shapes and other objects that Paint already has modified in 3D for manipulation and also allows users to draw out their own 3D images on to the application. It’s a pretty cool feature to have, and will come to use for those specialized 3D printing applications.

4) Cropping Is Easier than Ever 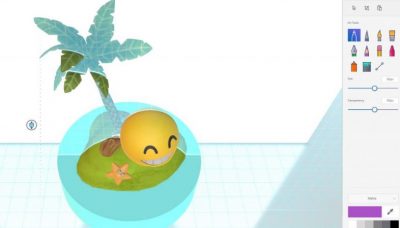 Thanks to a magic selection tool within Paint, subjects in images can be cropped out entirely and separated from the background. They can then be moved onto a new background and manipulated however the user wishes. This is a great feature, considering people always tend to struggle with the lasso tool on Photoshop to get that perfect crop. We’re not sure how well the magic cropping selection tool is, but if it can do the job in a more simplified medium like Paint, we’re looking forward to have our heads replaced with Superman’s body any day.

One of the greatest features that Paint 3D offers is the ability to make real world objects and automatically convert them into 3D objects. This can be made possible by way of a special app that will be released by Microsoft that will use the camera of a device to scan the real-life object and convert it entirely into 3D. According to the demo shown, it’ll also capture the colour and texture of that object, which we’re guessing won’t entirely be possible, but that will be subject to testing.

This will bring numerous creations that users make and bring them to the platform to further build on design. Clubbed with the previous point’s feature on this list, and it’ll be possible to make real-life images completely from scanned and cropped photos, without the hassle of using complex tools.

Microsoft has created a community especially for 3D enthusiasts. Think about it like a DeviantArt community for Paint. It’ll feature other users’ uploaded 3D content and they can borrow these contents and save them for use on their own projects. The community is integrated into Paint seamlessly and can be accessed any time. It’ll provide for some great graphic inspiration and also allow people to lift other assets as well.

Users can also make their specially designed 3D objects created on Paint come to life through Microsoft’s 3D printing software and can have it brought to life by simply printing out with a 3D printer. They can be prototype models, mostly used by architecture students and graphic designers and will help in creating some really cool artwork.

In the future, we’re expecting to see a lot more features coming to the Paint app as well – like 3D animation and VR-focused applications. Paint 3D is shaping up to be a great platform for creative minds. Let’s hope that the hype isn’t diminished when the software officially releases next year.

Until then, we’ll have to settle using the normal version of Paint on our systems and make those geometric abstract designs like everyone does.