Oculus is reportedly building a new virtual reality headset that will work as a standalone device and will not require a personal computer.

The Facebook-owned company divulged the details at its Oculus Connect event in San Jose, California, on Thursday.

The prototype what it calls ‘Santa Cruz’ is said to be more powerful than Samsung’s Gear VR and is equipped with inside-out tracking. The headset’s four cameras and onboard IMU are responsible for all of the tracking data. Details on the release, price and other features are not available yet.

Meanwhile, Oculus Touch for Rift will be available from December 6 for $199. Pre-orders open next week. Touch comes with an additional sensor, a connector for Rock Band VR and will be bundled with VR Sports Challenge and The Unspoken. The Touch lineup has over 35 titles spanning multiple genres.

That is not all, there is Oculus Avatars coming. The platform allows users to customize their VR identity with more than 1 billion permutations of textures, clothing and accessories. Avatars will be available for Rift at Touch launch and for mobile in early 2017. 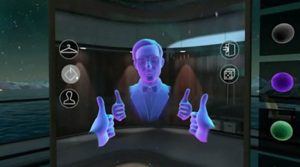 You can customize your VR appearance through Oculus Avatars.

If you are looking for Oculus Ready PCs, you now have more options to choose from. The Oculus Ready family of PCs now includes ASUS, Gigabyte, Lenovo, and AORUS.

The slew of announcements in both hardware and software, comes just a week after Google’s successful San Francisco event which saw the release of Pixel smartphones and its new VR headset that will compete with Oculus’ Rift, HTC’s Vive, and Samsung’s Gear VR.

Google’s Daydream View sells at a $79 price tag. It is lightweight and will connect wirelessly to any compatible phones. The headset also has a separate slot for storing handheld motion controller that can be used to perform gestures. Google has tied up with several multimedia giants to create VR apps for the Daydream platform.