Sony had a runaway hit on its hands with the original RX100 camera. Now that Sony has announced the RX100 V, it might just redefine compact cameras altogether.

The biggest update that Sony has brought about with the RX100 this time is the very helpful AF system that can track 315 AF points – covering 65% of the frame. That’s crazy! It does this via a special on-chip phase detection method that better helps subject tracking. It can take a jaw-dropping 24 frames per second at full resolution.

The camera looks almost the same as the last generation RX100 with 24-70mm f/1.8-2.8 zoom as well as a pop-up electronic viewfinder. The tilting can now come all the way forward for the selfie generation, which should probably fulfil the wishes of the 90% of buyers who will buy the camera for in the first place. How could someone not take a selfie with a camera like that, right? But sadly, the screen won’t have any touchscreen interface.

Sony’s press release claims the RX100 V to be the world’s continuous shooting compact camera. And that’s not all. Super slow motion recording is possible at up to a whopping 960 fps.

If video is your forte, the RX100 V can be a perfect companion. The camera, which is Wi-Fi and NFC compatible, can comfortably shoot in 4K without a hiccup. It has AF drive speed and AF tracking sensitivity and give plenty of flexibility based on focusing preferences. The RX100 V uses the XAVC S codec to deliver high quality results. It records video at a high data rate of up to 100 Mbps during 4K recording. Other video features include Picture Profile, S-Log2/S-Gamut, 120p HD Full HD mode and more. 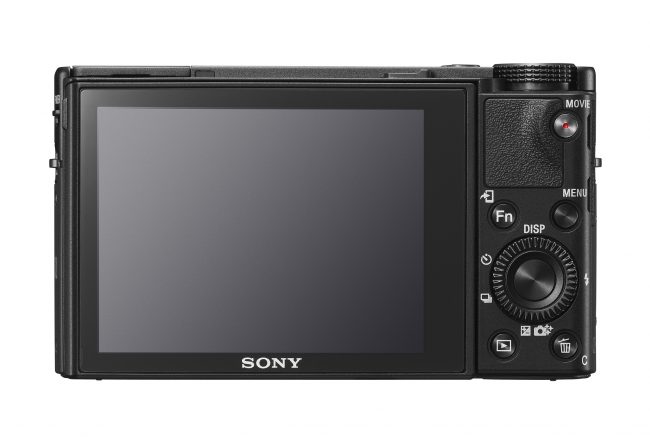 Neal Manowits, Vice President of Digital Imaging at Sony seemed pretty pleased with the performance of the camera. “Featuring a level of power and performance that has never before been achieved in a compact, the new RX100 V redefines what it means to be a ‘pocket camera’,” he said. “This camera is yet another example of Sony innovating to a level far beyond what exists in the conventional marketplace.”

The sensor on the device is supposed to be a newly developed CMOS sensor with DRAM chip, a ZEISS Vario-Sonnar T 24-70 mm large aperture lens. But the magic truly happens within the enhanced image processing system that expands memory buffer and optimizes image quality, especially at high ISO settings. Sony really does mean business with this camera, because as far smartphone cameras are improving day by day, just the raw tech specs of this compact camera will blow any smartphone or even a few DSLRs out of the water.

Speaking about the new AF system, it can lock focus to a subject in as little time as 0.05 seconds. For capturing super-fast objects, there’s a special Anti-Distortion Shutter that can capture an image at 1/32000 of a second, making it finally possible to take a pic of Usain Bolt when he’s running the 100m.