The market has been mostly dominated by under-priced products with over-powered specifications. And thanks to OnePlus, there’s now a niche in the segment that begs to bring out the best that many can buy. Stepping up to the table on that front has been Asus, with their ZenFone series and Xiaomi with Mi series of phones. They’ve both got features that laugh at today’s flagships. Now out with their latest, which one will walk away the winner?

Both Mi 5s and ZenFone Deluxe 3 are metallic. And they do away with the plastic and fiber bodies that resonated cheapness and affordability. They both come with a metal uni-body design and the Mi 5s comes with an all glass solution on the front. While the fingerprint sensor fits on the back of the ZenFone 3 Deluxe, it’s found on the front of the Mi 5s.

Now there’s nothing wrong with either of the builds. They’re both sturdy, look definitely posh, compared to the rather industrial looking and conventional OnePlus 3. Kudos to ZenFone for coming up with an antennae-less design. Something that comes out as more than prominent on a lot of phones after iPhone started the trend. It’s barely visible on the ZenFone, but the Mi 5s embraces it.

Compared to the Mi 5s, the ZenFone’s parts are more visible on the front, thanks to the top and bottom chin of the device being wrapped in a metallic backing. The Mi 5s has a plusher feel on it, making the front of the phone smoother and less interrupted, design wise. They’ve also been thoughtful enough to add some curvature at the side of the screen.

At the back, the familiar ZenFone fingerprint sensor and camera modules are set up, making the rear of the phone rather busy-looking on Asus’ side. Xiaomi has kept just the camera and flash modules neatly tucked on the corner. For build quality and looks, the solid infrastructure that these two phones give matches the best out there. Of course, there’s just no water-proofing. The Xiaomi’s design and build was a lot more carefully thought out to make the phone look elegant and sleek, while the ZenFone’s looks will be considered loud and attention grabbing.

The Mi 5s features a full HD display, grabbing an NTSC 95 percent colour gamut and a brightness of 600 nits. There are 16 energy saving, ultra-bright LEDs on this bad boy. The screen is a 5.15-inch panel. 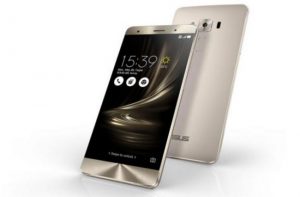 The ZenFone 3 Deluxe has large 5.7-inch screen Full HD Super AMOLED display that should pop out colours for images and videos. And that’s about as exciting as it gets for these two phones’ displays. The technology here isn’t anything innovative or new and it doesn’t need to be either. It’s tried and tested, reliable hardware that can reproduce colours beautifully well. The AMOLED on the ZenFone will work wonders for battery life and eye-popping colours, while the 5s will provide those smooth tones of balance to colours and brighten up when it’s most needed.

Alright, this is actually where it boils down to. Because what is inside, matters most; and also gives a fair bit of reason why these phones are so hyped about anyway. The most interesting part about this comparison is that there’s quite little to consider here, since both devices sport the same processing chip – Snapdragon’s powerful 821 chipset SoC. Now the ZenFone gets to be privileged enough to be the first phone ever to be powered by Snapdragon’s best. And they went all out. The Mi 5s has the same chipset, with the difference over the ZenFone being the CPU clock speed. ZenFone packs a more powerful 2.4 GHz chipset, while the Mi 5s is a milder 2.15 GHz chipset. But the difference in performance is barely noticeable, and won’t really cause either phone to skip a beat.

The RAM comes by way of a 3 or 4 GB configuration for the Mi 5s, while the ZenFone has an overkill of 6 GB. Which of these is for power users, we’ll let the users decide. But for now obviously, the ZenFone certainly comes out as a more attractive option.

The Xiaomi is discreet. And does a good job of keeping things on the low side, like the fingerprint sensor, that’s below the capacitive glass button on the front of the phone. But that’s not all. The fingerprint sensor is claimed to be more accurate, owing to ultrasonic wave technology that recognizes human fingerprint faster. ZenFone went the traditional way of having its fingerprint scanner put up at the back.

Both these phones offer speakers on the bottom side, along with the USB C-Type standard.

These two models run on very different skins of Operating Systems that have been tailor-made by their manufacturers. The Zen UI on the ZenFone is rich with animations. It’s fast and zippy, yes. But also will be a burden on the processing once more apps are open. But it’s not been completely tested yet, so there’s still hope, maybe?

The Mi 5s is backed by Xiaomi’s proprietary MIUI, most popular for its straight-forward design and lack of an app drawer, for those who can live without it. Xiaomi haven’t really unveiled anything special on the skin for their latest, but they are bound to have something up their sleeves. Although, both handsets will come with Marshmallow, they should be getting their respective Nougat upgrades any time soon.

Xiaomi’s camera is something of a specialty – a 12-megapixel rear camera with a Sony IMX378 sensor and an f/2.0 aperture, similar to the Nexus 6P, HTC 10 and Nexus 5X. It also supports PDAF autofocus. Its front facing camera is a humble 4-megapixel unit and the same f/2.0 aperture. Flash comes in dual tones and the phone can capture 4K at a smooth 30fps. The front-facing camera too isn’t shabby, being able to capture an 80-degree wide angle shot in one frame.

Unlike the Mi 5s, the ZenFone’s rear camera comes at 23 MP with f/2.0 aperture. This one’s got Sony’s IMX318 sensor for some accurately lit photos and Optical Image Stabilization to boot. The front-facing camera is a sharp 8MP shooter and will be a formidable foe against Xiaomi’s 5s offering.

On the price front, ZenFone 3 Deluxe sells at $530 while Xiaomi 5s is available for $345. The ZenFone 3 Deluxe comes with better RAM, more powerful processing, bigger AMOLED screen, larger storage and fast charging. The Xiaomi comes with better looks, better fingerprint sensor integration, the same processor and a better price-point. Of course, at their highest-end, these two models don’t compare in terms of specifications. But how important are the details? And what is really more important in a phone for the user? Xiaomi is very close to beating the ZenFone 3 purely out of more value for money. Of course, evening the scales are in Xiaomi’s favour again, its older sibling – the 5s Plus has the same specs as the 5s, making it just as powerful as the ZenFone 3, but still cheaper at $390. So the real winner here is obvious, isn’t it Xiaomi?