If you are eager to discover the official specs on Google’s Pixel and Pixel XL smartphones, you don’t need to wait till October 4. A popular British mobile phone retailer has leaked pictures and specifications of the high-end smartphones on its website.

Carphone Warehouse has posted two separate pages with overview, pictures and even a tagline on the much-awaited devices. Just as was speculated, the Pixel and Pixel XL sport a premium design, with circular icons, large bezels at the top and bottom of the screen and the new Pixel Launcher. A screenshot of the same was published by 9To5 Google, later carried by major press. The tagline of the page shows “Introducing Pixel, Phone by Google”.

Both the devices are shown to support Live Cases, previously made available for Nexus line phones, and comes integrated with Google Assistant (personal assistant like Siri and Cortana), Allo for messaging and Duo for FaceTime-style video calls. The devices also boast of unlimited storage for photos and videos, all stored at full resolution in Google Photos.

Pixel and Pixel XL will be officially released at Google’s October 4 event in San Francisco. The event will also see the unveiling of a host of other products, including Google Home, Google WiFi and a new Chromecast.

The Pixel-branded devices will run on Android 7.0 Nougat.

The Pixel phones, manufactured by HTC, is speculated to replace Google’s Nexus handsets this year. Towards the specifications, we know for sure it will run on Qualcomm’s new Snapdragon 821 processor with 4GB RAM and 32GB or 128GB storage options. The Android Nougat-based devices will sport 12MP rear camera and 8MP frontshooter.

On the display front, the Pixel comes equipped with a 5-inch Full HD screen using an AMOLED panel. The screen is protected by Gorilla Glass 4, and has a pixel density of 441 ppi. The Pixel XL will have 5.5-inch display and Quad HD resolution with a pixel density of 534.

Both the devices will be powered by different battery sizes. The Pixel will have a 2770mAh, while Pixel XL will see a larger 3450mAh battery. On standby, Pixel could go up to 552 hours, while the talk time can range from 30 to 32 hours. Towards connectivity, Pixel and Pixel XL supports NFC, Bluetooth, WiFi, GPS, 3G, 4G and Wi-Fi hotspot and tethering. 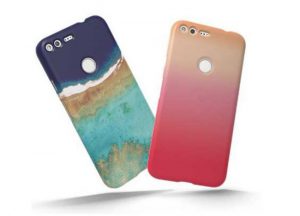 The new Google phones won’t be the first Android 7.0 Nougat devices, but will surely be the first to support the search giant’s DayDream VR platform. And Google has changed the name of its app launcher, Nexus Launcher to Pixel Launcher. The new launcher will be exclusively available on Google Pixel devices and will have a new interface, more apps in the app drawer and smaller icons.