The Huawei MediaPad M3 was first unveiled at the IFA last month. We’ve just found out that it’ll soon see a release in the United States. Here are the top 5 features about the MediaPad M3 that should excite those looking for a power-packed tablet!

Screen – Big and Hi-Res
The Huawei MediaPad M3 tablet takes its screen game a notch higher, by introducing a bigger, higher-res display – at 2560×1600 pixels, a battery that will last up to 11 hours and also availability in Wi-Fi only and LTE variants. Viewing videos on the fly and playing games in marathon sessions will be an absolute breeze.

Processor – Power packed!
It’ll come packed with the octa-core 1.8GHz HiSilicon Kirin 950 processor that proved its stellar performance in the Honor 8. The processor will be paired with a generous 4 GB of RAM and 32 GB of internal storage which will also be expandable up to 128 GB via SD card. 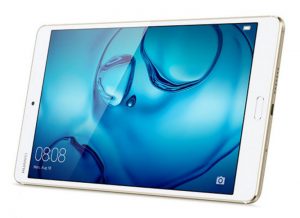 Battery – long and strong
The MediaPad M3 boasts a 5100 MAh that can churn out up to a reported 11 hours of standby, which should compliment that lovely big screen and processing power. It is less often we see tablets in this range come with a massive battery backup. Coupled with Android’s new Doze mode, energy efficiency shouldn’t be a problem.

Two Flavours – Wi-Fi and LTE
Price point plays a major role in the MediaPad’s success. Which is why, to make things easier for the consumer, they’ve rolled out a Wi-Fi only version and an LTE, which is a smart move. Not everyone will want to pay the premium for LTE, considering the base storage option is 32 GB. Throw in expandable storage we have our very own portable media solution!

Although the prices for this new tablet haven’t been announced for the US yet, it’ll be selling in Europe starting at 349 Euros, with users needing to pay a little extra for the added 64 GB storage and LTE. Huawei has also managed to add a fingerprint scanner on home button, but have skipped including a USB Type-C (the norm nowadays) and have stuck with the traditional micro USB port.

The device certainly looks good and does have that elegant feel about it, coming in trims of gold and silver. Although there has been no confirmation whether there will be any special colors coming to the US. The tablet seems like a capable one but we’re sure the features won’t be enough to beat the other manufacturers’ offerings like the upcoming Google tablet and the iPad, if Apple plans on releasing one.

If Huawei can manage to price the tab right, and offer that much needed Nougat update soon, it can score those brownie points with the US audience. Huawei has done well for itself in the handset market but its tablets haven’t really been part of Huawei’s forte.

Let’s hope this one turns out to be a winner and a value for money offering from the smartphone giant.