Xiaomi on Tuesday launched the Mi 5w and Mi 5s Plus, putting to rest months of speculations and rumors surrounding the device.

Much of what was speculated came right. The Mi 5s and Mi 5s Plus smartphones have an all-metal design and is powered by Qualcomm’s latest Snapdragon 821 64-bit octa-core processor.

For more on the specifications, the Mi 5s has a 5.15-inch Full HD display, 12MP camera on the back with Sony’s IMX378 sensor and a 4MP front shooter. The camera also comes with an f/2.0 aperture, a dual-tone LED flash, auto-focus, auto HDR and video recording of up to 4K resolution.

As was earlier rumored, the Mi 5s sports an ultrasonic fingerprint scanner, which is based on Qualcomm’s Sense ID technology. The scanner will recognize a 3D map of fingerprint through ultrasonic waves, thereby negating the need for a separate button on the panel.

The dual-SIM device will be powered by a 3200mAh battery that charges via Qualcomm QuickCharge 3.0. Connectivity options include Wi-Fi, GPS, Bluetooth, NFC, 3G and 4G.

Towards the Mi 5s Plus, the 5.7-inch device as well comes with two memory variants, the same as 5s, and carries a dual 13MP cameras on the back. The battery capacity of the device is a whopping 3800mAh. 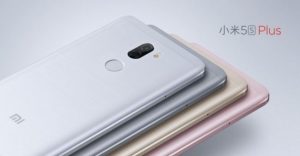 Both the devices will come in silver, gold and pink colors. For Mi 5s, Xiaomi also has a dark gray option. As Gadgets Post reported earlier, more than 1.2 million people have already registered for the devices. The sale begins on September 29.