The demand for Apple’s new flagship is remarkably high. So high that Apple has run out of stock for iPhone 7 Plus and the iPhone 7 jet black models. 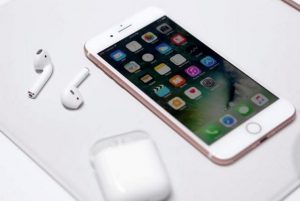 Apple: iPhone 7 Plus and jet black iPhone 7 supplies are completely sold out

Apple has issued a statement announcing that the initial quantities of iPhone 7 Plus in all finishes and iPhone 7 in jet black got sold out during the online pre-order period. The devices will temporarily not be available for walk-in customers.

From Friday, only limited quantities of iPhone 7 in silver, gold, rose gold, and black will be available for customers at Apple retail stores.

“Customers can continue to order all models in all colors on apple.com. We sincerely appreciate our customers’ patience as we work hard to get the new iPhone into the hands of everyone who wants one as quickly as possible,” Apple’s note reads.

Cellular carriers T-Mobile and Sprint said the preorders for the iPhone 7 was 4 times bigger than iPhone 6. The reports of strong iPhone 7 sales has sent Apple shares climbing to a nine-month high of $111.77.

Last week, Apple unveiled the iPhone 7 and iPhone 7 Plus at its September 7 event. Though there were concerns of the flagship’s success after Apple eliminated the traditional 3.5mm headphone jack and failed to bring any hardware revisions, the increasing demand of the device has proved critics wrong.

And add to that, Samsung’s woes which is driving Android users to the iOS camp. Samsung issued a recall on its Galaxy Note 7 after getting dozens of reports of batteries in the device catching fire while charging.