Samsung has launched a new variant of the Galaxy Tab A. 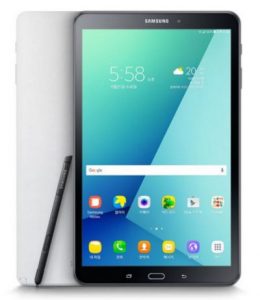 Galaxy Tab A 10.1 has been launched in South Korea and will soon hit store shelves in other countries

Powered by an octa-core 1.6GHz processor, the tablet features a 10.1-inch display, 3GB of RAM paired with 32GB of internal storage. The Galaxy Tab A 10.1 comes with a microSD slot to expand the memory from 16GB up to an additional 200GB.

The tablet runs on Android 6.0 Marshmallow and supports 4G LTE networks, 802.11ac WiFi, Bluetooth 4.2, and GPS. It is reckoned to deliver high performance with all-day battery life and upgradeable storage options. It packs a 7,300mAh battery which is said to last up to 14 hours on WiFi.

Towards the camera, Samsung has equipped the tablet with a 8MP rear-facing camera and a 2MP front-facing shooter.

And with the advanced multitasking tools, users can easily open two apps side by side. And the best part is the new S Pen (SM-P580) that makes tasks a breeze. The S Pen makes it effortless to write notes, translate text or draw directly on photos.