This is no rumour. Apple’s event in San Francisco today saw the unveiling of iPhone 7 and iPhone 7 Plus. 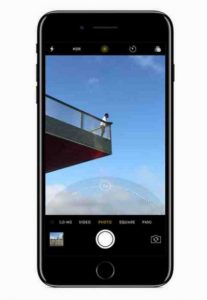 Apple introduces iPhone 7 and iPhone 7 Plus with wireless earbuds

As speculated, Apple’s new flagship device kills the headphone jack and has a new Home button. Ear pods will replace the 3.55mm headphone jack, connecting directly into the Lightning port.

Apple has not introduced any design changes in its new device. The screen sizes of the two smartphones are same as the current-generation iPhone 6s and iPhone 6s Plus.

For photo enthusiasts, the iPhone 7 comes with new 6-element f/1.8 aperture lens with 12-megapixel sensor. A new 7-megapixel front camera is included as well. The iPhone 7 Plus has dual rear camera setup and is capable of 2X optical zoom and up to 10x digital zoom for photos.

Additional camera advancements include a new Apple-designed Image Signal Processor, which processes over 100 billion operations on a single photo in as little as 25 milliseconds, a 7-megapixel FaceTime HD camera and Quad-LED True Tone flash that is 50 percent brighter than iPhone 6s

“iPhone 7 and iPhone 7 Plus dramatically improve every aspect of the iPhone experience, reaching a new level of innovation and precision to make this the best iPhone we have ever made,” said Philip Schiller, Apple’s senior vice president of Worldwide Marketing.

“The A10 Fusion chip is the most powerful chip on any smartphone while delivering the best battery life ever in an iPhone,” said Schiller, in a release.

The water and dust resistant devices will be available in 32GB, 128GB and 256 memory options. In addition to silver, gold, and rose gold, the phones will aslso come in two black variations — “jet black” and “black”. Both phones include support for up to 25 LTE bands

The iPhone 7 will have a starting price of $649 and the iPhone 7 Plus will have a price tag of $769. The devices will be available for pre-order beginning from September 9.