In yet another feud between two leading smartphone manufacturers, Motorola has accused Samsung of pilfering its ‘Always On’ display.

The ‘Always On’ mode is a feature that lets the screen of the phone stay permanently on with minimal information like time, date and basic notifications. 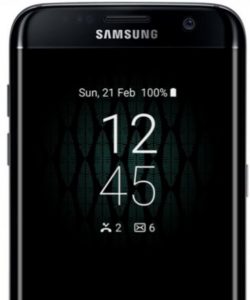 Motorola accuses Samsung of copying Always on display feature for its Galaxy Note 7.

The feature has been a rage this year, with both Samsung and LG implementing on its models. However, each time this feature was referred, it was always compared with the same thing, Motorola’s ambient display.

The comparison was pretty obvious, and now Motorola is flat-out accusing Samsung of stealing the feature.

Motorola took to micro social media to express the matter. Over on Twitter, Motorola commented, “In what galaxy is it okay to steal competitor phones and cool features?”

The statement, clearly meant for Samsung, was then responded by – “#TheOriginalAlwaysOnDisplay. While Motorola definitely had the most memorable version of this feature, it definitely wasn’t ‘the original’.”

Samsung is all about to bring the Galaxy Note 7 in India, among other countries. The company highlighted many new features of the smart phone at a recent event, one of them being the ‘Always On’ display that was first seen on the Galaxy S7 and Galaxy S7 Edge.

A pursuit of truth through older smart phones show the features first seen on Nokia devices, both within the Symbian and Windows Phone spaces. They used low-power modes to show time, and it
was a great addition.

Motorola later improved on the feature by adding interaction with notifications. This is why we all remember it so well, and why we’ve seen it on nearly every device from the company since the original Moto X back in 2013.

Interestingly, smartphone manufacturers have often accused each other of copying design features and sometimes even user interface layouts. In the recent past, Apple and Samsung have accused Chinese manufacturers Xiaomi, Huawei and others of copying one or the other aspect of their flagship phones.

The controversies, however, dont seem to perturb users as long as they can flash a phone with engaging features and great design.

So guess, Motorola will have to just let it go, as we wait for Samsung’s next – Galaxy 7 Note.